“Let’s NOT Make a Deal” with Pregnancy Decisions 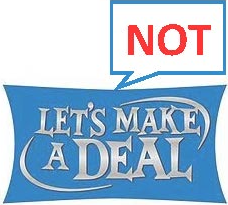 “Which will you choose–what’s behind curtain #1…curtain #2…or curtain #3?” It was the moment of truth for the zany game show, “Let’s Make a Deal.” A contestant dressed in some sort of outrageous costume would be given the opportunity to choose his or her prize by selecting a curtain, but without knowing what was behind it. The prize could be cash, jewelry or a shiny, new car…or just as easily, it could be a crazy gag gift, like a live animal or piece of junk. The audience and contestant alike was holding its collective breath, waiting to see what was going to be behind the curtain.

This moment may have worked great for a game show, building tension and anticipation that made it a family favorite to watch. But in reality, making decisions without knowing your options is not a good idea–especially when it comes to an unplanned pregnancy. On the game show, the contestant ultimately had nothing to lose. She may not get a great prize, but she won’t be losing anything either. The stakes are much higher, however, when deciding what to do about a child that has been conceived.

The bottom line is that when a woman becomes pregnant, no matter what choice she makes, it is a life-impacting decision. Whether she chooses to parent her child, place her child for adoption, or terminate the pregnancy, her life will never be the same. Because of this, women deserve to know exactly what is behind each “curtain” before her decision is made. This is the work that pregnancy centers do–providing women with critical information about all of the options for her unplanned pregnancy so she can make an informed decision, not a random choice just hoping for the best.

Pregnancy centers are often labeled as “anti-choice” in the media, but nothing can be further from the truth. These centers exist to make sure that women actually have a choice–a true choice…an informed choice. This comes when she has been educated about what is involved in each of the three options that exist for an unplanned pregnancy, including the risks she will face. Part of informing her also includes educating her about what is going on in her body specifically. This is done in centers with pregnancy testing, ultrasound and often STI testing. She needs a clear picture of her situation, her body, and her options. Then she can make a decision without it being a shot in the dark, like choosing a curtain on a game show.